It is a little known fact that I was once a near fully-committed Brother of Sigma Phi Epsilon.

A promise of social prestige and exclusive access to “the most lit parties on campus” pushed me into Rush Week. And then, of course, pledge semester, which I undertook while going to college as an Army ROTC cadet on scholarship.

Pledge semester’s hazing treatments and bizzare basement rituals were, I believe, indirectly related to my concurrent obsession with Interesting Beverages.

“Hey pledge! Shotgun this Natty Light, then Edward Wine Hands these bottles of Merlot with me, but only after you mix a 5th of Jack with prune juice and chug it while standing on the roof in your underwear with a blindfold on!” – Brother Fuckhorse

Drinking Interesting Beverages became a Rite of Passage for me.

Anytime a Bro suggested I try a new beverage, I did, and almost every morning I would vomit after running laps at ROTC. The juices that most people used to digest cafeteria food were my daily mouthwash. 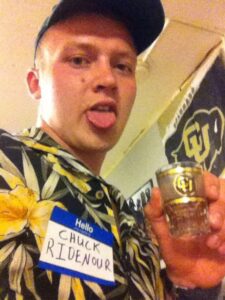 It wasn’t until I drank a particular Interesting Beverage in the Jungles of Perú (four years, and many piles of puke later) that this uncontrollable urge to pour bizarre liquids into my body was presented as a gift — as opposed to a curse.

The day after our final initiation ceremony into Brotherhood at Sigma Phi Epsilon, they asked me to pay $700 in “chapter dues,” and then on top of that, hand over $800 of rent money for a shared room in the disgusting mansion those gangfaloons called home.

I dropped out immediately.

For thousands of years (some say 2,000, others say 70,000. I’ve read probably 8 different estimations) the Shamanic practice of the translation of the unseen was always paired with an Interesting Beverage.

While we got left with Brother Fuckhorse…

There’s one Interesting Beverage everybody talks about, and there are certainly many reasons why. Unfathomably psychedelic, therapeutically exotic, and totally terrible tasting: they call her Mama Ayahuasca.

Otherwise known as La Medicina, Yagé, La Purga, or “the tea”, Ayahuasca is essentially a potion derived from a mixture of the adult Ayahuasca vine, Chucruna leaves, water, and often some other plant additive. 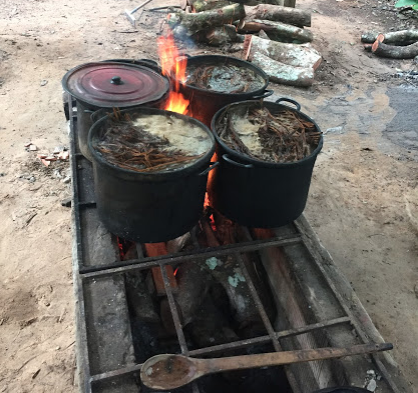 Consumed separately, the plants are ineffective and harmless. Brew them together over an open fire for a week, and the resulting purpleish sludge can transport your consciousness to realms previously inconceivable, unless you are J.R.R. Tolkien.

For more information on the chemical makeup of Ayahuasca (and many other medicinal plants), please save yourself some time by reading about them here at www.wearenovalis.com. They know wtf they are talking about.

Novalis is a more-than-livable, off-grid rainforest conservation center, research platform, indigenous project facilitation group, artists residency, and medicinal plant research center all in one. On a website called workaway.info they posted that they were searching for volunteers to help develop and build a Medicinal Plant Library. I responded with an email describing my recent situation: I was living under a tree in the desert with a gang of artisinally-inclined Argentine hippies and random British Bohemians. 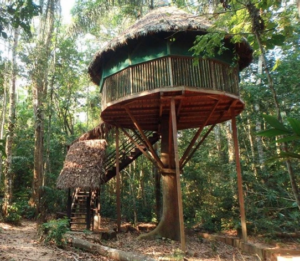 After hitchhiking 694 Km, being rejected by the Catholic Church, and sleeping outside a hospital with the drunk and diseased, I was left with 2000 Chilean Pesos in my pocket. ($3).

I bought a large bushel of bananas, ate three, handed five to my befouled hospital pavement family, and was left with 1500 pesos — the exact price of a shuttle bus into Perú.

There, in the Sacred Valley of Perú, I lived in a former Tantric Sex Palace located beside a guinea pig farm and paid for it by cooking vegan food with “people” who were probably extraterestrials. 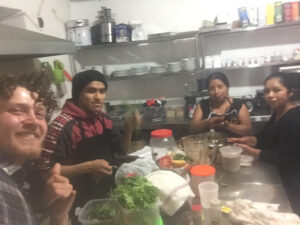 Kitchen crew at Spices in Pisac

Then one sunny Sacred Valley morning, as the guinea pigs commenced their squealing, and a shining astrological light horse chariot met my stained glass iris, I received an email from Novalis. They felt I was a perfect fit.

$6 USD purchased me a 14 hour bus ride through the Andes Mountain Range en route to Puerto Maldonado and the Amazon Rainforest. Waiting amongst the steamy leaves and adolescent monkey screams, was a stone faced jungle man who’d teach me how to translate the unseen.

I was brushing my teeth when he walked up behind me. The reflection: a Peruvian man wearing dark sunglasses, a tank top, and multi-colored neon swim trunks.

“You must be Lamar,” I said, in my most unwavering Spanish.

He chuckled endearingly and said “I am,” then asked politely if he could use the sink next.

We were 3 hours deep into the Amazon at that point, totally off grid, lacking any form of immediate communication with the outside world.

Jefé, the boss, had rounded up 3 other young gringos too; I think it’s suffice to say we were the Chosen Gringos that day. Living together without Social Media made us more social than we’d ever been. It was as if the wooden gates to community — the unification of communication — had been burned down by a benevolent dragon, and our souls could finally meet for a long-awaited block party, a celebration of connection with ourSelves and the Divine; all occurring within an expansive palace of plants. 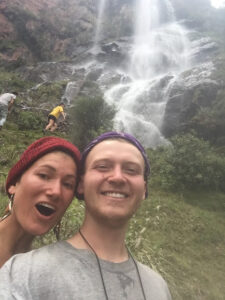 Try to find the 4 gringos.

These three Gringos taught me much, and we drank many an Interesting Beverage together. From my recollection and diaries, I can recall consuming Chapo (warm banana puree), Té de Cíon (ginger tea), Acaí Root, Water from the Cebrada Merino and Rio Las Piedras, aSan Pedro Cactus, medicinal grade Cacao from Boca Pariamanu, and once back in town, Tiger’s Milk (chilled ceviche juice).

No Beverage on this list, however, was more interesting than Mama Ayahuasca.

Since hearing Joe Rogan talk about Ayahuasca on his podcast, I determined that one day I would let the legendary jungle brew flow through me. For whatever reason, the age that resonated with me was 25. Having turned 22 a couple weeks earlier, I was being presented a once-in-a-life-time opportunity to rearrange my destiny. Yet, the night of our first ceremony, remarkable stories of psychonautic lore had me sweating in my filthy khaki shorts.

People talk about dying and coming back to life on this stuff. They recall vivid and endearing conversations they had with extra-dimensional beings while soaring through elaborate manifestations of time and space. Graham Hanncock believes listening to and integrating what we learn while in ceremony with Ayahuasca is the only way to save humanity as we some-what know it. They say the medicine never leaves you.

Even the fact that they used pronouns like “her” and “she” to refer to the beverage was unsettling at first. (I later determined that these pronouns are appropriate, especially when communicating with practitioners as diverse as 3rd generation Shipibo Unaya Shamans or temporary jungle witches from the suburbs of North Carolina). “La Medicina” became my preferred term. 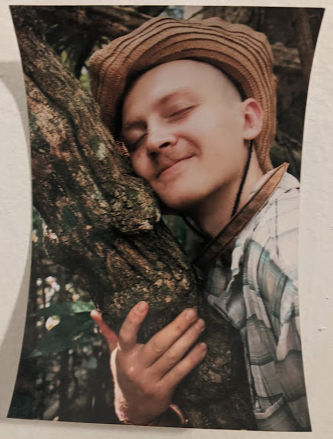 It was a previous boss (he’d take the Beverage 80+ times) who told me “You can never be too young to take Ayahuasca, but you can be too old.” This was the comment that pushed me over the edge. I later found that indigenous people will give their new-born babies microdoses during communal ceremonies. And by “you can be too old,” he may have meant that you might die before ever having another opportunity. (Or even that you, glumly, lose the adventurous curiosity required to engage in a proper ceremony).

I’ve now imbibed with Ayahuasca on 20+ occasions; an ongoing Rite of Passage it has been. My first ceremony, very specifically, opened up the concept that uninhibited euphoria can be obtained once The Riddle is solved. But more importantly that there is a Riddle at all. Call it a ‘key’ or a ‘punchline,’ at some point we will all “get the joke” and rejoin God in eternal Unity. (Not that the word Unity would have any significance at that point.).

Absolute hilarity will push us into a state of perpetual laughter.

It is a common part of ceremony tradition to openly share with the rest of the group what you learned/experienced during the morning after a ceremony. With practice the recounting and integration of ceremonies becomes more fluid and your focus shifts from “figuring out what the hell is happening” to “ok my friend, what are we here to learn tonight?”

Personally, I spend about 3-4 hours every morning after ceremony writing in a notebook. This is a huge download period and the scrupulous notes I take have largely informed my better life decisions. 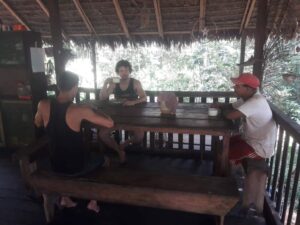 In fact, after that first ceremony, I didn’t touch alcohol for another 10 months. I was shown lucid images of my family and friends being rained on by thick sludge as they drank various alcoholic beverages; My grandpa holding a whisky rocker; my mom swilling red wine; a best friend swigging pale ale; all of them laughing hysterically. The rain slowly melted them into a puddle of black muck and a few specific words echoed in my head: “If you drink alcohol, you will not reach your full potential.”

*** 10 months later (while drifting asleep on a friends couch after a night drinking beer for the first time since), the familiar female voice of Mama Ayahuasca returned in my head. She was chuckling lovingly. I said sorry for finally breaking the alcoholic beverage celibacy, and then she said “ha ha ha, of course you were supposed to drink again!”

I ask myself whether it is wrong to compare Lomar (a highly trained, generationally-inclined plant worker who regularly guides people on voyages through their unseen consciousness) to Brother Fuckhorse (a crass, obscenely belligerent goomf, spending Daddy’s coin on Natty Light and Copenhagen Long Cut).

But in the end (existential punchline?) both of these men are ‘shamans’ offering a Rite of Passage via traditional ceremony. All you have to do is drink their Interesting Beverage.